Is Trump God's Chosen One? 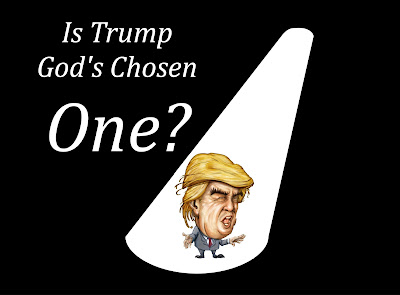 Strange, I was talking to a relative recently and he told me that God has chosen Trump to lead the free world. He said that Trump is part of God's plan to set America right again. He was sure about it. Out of respect, I listened to him with a smile. I knew you can't argue with preconceived bias, especially one that has been proven right by the democratic process.


Needless to say, my relative is pro-Trump. He said to the effect that Trump's rise is prophetic. He can even throw scriptures at you to support his view. At some point, you get the feeling that Trump to him is the equivalent of the revered Moses or the adored King David.


My relative felt deeply that Trump was chosen for such a time as this, that is, to shame the proud, promote the Christian cause, give voice to the poor, stop the rich from plundering the country, and put Merry Christmas back into shopping malls. And 8 Nov was where the so-called prophecy came true. He just couldn't be more right about his almost messianic convictions.


Now let's be clear, I am not a Trump supporter. Neither do I condone Hillary’s misdeeds. Both presidential candidates smack of controversies that point to a serious crisis of character. The reality is that this election is sadly reducible to a Hobson’s choice (or a reverse Sophie’s choice) where the option on either side pains one's conscience or good sense immensely.


If I had to vote, I would nevertheless go for experience - knowing full well that character on both side of the divide is a non-starter here (or self-incriminating). But on ballot day, neither character nor experience matter much to the angry majority. What seems to matter however are the three C's: Charisma, Contempt (against the status quo) and Change. And although Trump had a mojo-full of the first two, I dread to think of how his xenophobic, racist, globally-averse, anti-immigration, anti-trade, tax-slashing, and most times, divisive and apparently extremist policies would push the direction of change.


I guess only time will tell, right?


So, the fact still remains: Trump won. That's history in the making, and sometimes history prepares no one for the result. Many will just have to deal with it, or suck it up, and hope for the best.


But having coming to terms with this morning-after reality, what is one to make of all that? Is Trump really God's choice? Has God been preparing since the campaign started for the ascension of an unapologetically spoilt and loose-mouth real estate billionaire who often promises more than he can deliver? (It is in fact no surprise that he recently announced after meeting Obama at the White House that he will retain some aspects of Obamacare and claimed that persecuting Hillary on the email debacle is not his first priority).


So, are we now witnessing the second coming of Trump who, like Steve Jobs, rose out of the ashes of the heap of many business and personal failures in order to lead a nation of 330 million, and even the world, towards a certain decidedly sustainable economic, social, emblematic, and spiritual revival? Is my relative right about Trump being God’s elect - appointed for such a time as this?


I know we Christians want to stand on the side of history and believe that any revolution started by one man is as good a divine sign as a revolution started by God. But aren’t we jumping the gun here when we endorse Trump as God’s special anointed just because he professes to be a Christian, promises from the pulpit to uphold Christian values, trumpets the call for Christian unity against abortion, gays and immorality, and met with more than 50 pastors and clergy in various settings to be prayed over for guidance, success and presidential confirmation?


I mean, isn’t this a case of not just using God's name in vain, but using His name to great strain?


Now, at this juncture, I do not want to limit God or my faith-charged imagination. I know God can use anything or anyone to be his emissary. An adulterer, a murderer, a coward, a deceiver, a denier, a betrayer, even a donkey were not off limits for Him.

In Isaiah 10, God even used evil to bring judgment on Judah for their idolatry. In other words, He raised a ruthless and dreaded nation, namely, Babylon, to teach his people an unforgettable lesson. It was part of His sovereign plan just as the cruxification of Jesus where the instrumentation of evil was used for the fulfillment of the ultimate redemption was very much within his intended divine purpose.


Whether the instrument for His use is repentant or otherwise, transformed or condemned, God is ultimately in control. He therefore hand-cradles all events in history in the direction of His will even in seemingly unfathomable intervals of active intervention when He needs to violently shake the shattered pieces of humanity up in order to put them in their proper places.


Mankind therefore only sees the rise of an epoch. But God sees the entirety of all events unfolded. Temporality is thus no match for eternity, and secularism no match for omnipotence.


So, after all's said and done here, is Donald J Trump God’s chosen one?


I really don’t know, and (if forced to take a position) don’t really think so. That’s just me. But if you take all and sundry as part and parcel of God’s sovereign plan of inexorably moving history past, present and future towards a definitive end as foretold in the last chapter of the Book of Revelation, then you can safely count Hitler, Saddam and even the Jews who crucified Jesus as unwitting pawns in God’s ultimate redemptive goal for mankind. It is akin to His common grace that makes the rain to fall on the just as well as the unjust. A view this providentially all-embracing will leave not even an inconspicuous grain of sand out as an instrument of His overall divine implementation – what's more Trump.


But here, I am looking at it much more narrowly. I am looking at God’s more exacting will, and not just functional or permissible one. And I am looking at Trump as a person, that is, the values he embody thus far (or the lack of it). You can say that I am casting stones, and conveniently forgetting about the log in my sin-jaundiced eye. My point however is to specifically address what my relative had so confidently asserted to me, that is, Trump is God’s chosen one. That is, his presidential win is within God's purposive, exacting will.


So, however much I want to say, from a limited human perspective, that Trump can’t be God’s chosen agent of change, I am restrained to adopt a more cautionary stand to it. And since no man is beyond redemption, and Jesus himself saw hope even in the ones who nailed him to the Cross, I take his lead and opt for a wait-and-see approach.


In any event, isn’t it written that by his fruits, you shall know the man? And although Trump had undeniably bore “fruits” of questionable roots thus far - all the lies, manipulation, demeaning insults, racism, sexism, bigotry, back peddling and groping notwithstanding - I sincerely hope his presidential christening this coming January will somehow be his road to Damascus experience (it is so much more easy to believe in a wholly repentant Trump as one within His specific plan than an insidiously opportunistic one). Only time will tell I guess.


Let me end with the rich young man’s encounter with Jesus in Mark 10:17 with a mischievous twist of my own. To be read with a pinch of salt of course.


“And as he was setting out on his journey, the billionaire ran up to him and asked him, “Good Teacher, what must I do to inherit eternal life, and be a godly president? And I am not saying that I need to do a lot because I have done quite a fantastic job so far. I totally got the winning ticket. I am that good. So, just name it and I will frame it.”


And the teacher said to him, “Why do you call me good? No one is good except God alone. You know the commandments: ‘Do not murder, Do not commit adultery, Do not steal, Do not bear false witness, Do not defraud, Honor your father and mother.’”


And he was too preoccupied trying to align his flowing golden locks with the direction of the untamed wind and nearly forgotten what the teacher said before his aide leaned over to repeat it to him, and he replied, “Teacher, all these I have kept from my youth, at least from what I can recall from my youth. And I got perfect memory you know. Totally. Anyway, I am totally on it, as clean as a whistle, and fantastic youth I had. Did I mention that I am the people’s choice? Anyway, been there and done that. I mean, I’ve kept them. I am a 100 per cent on it. Totally.”


And the teacher, looking at him, in particular his pouted lips, said to him, “You lack one thing: go, sell all that you have and give to the poor, and you will have treasure in heaven; and come, follow me.”


Disheartened by the saying, not to mention feeling incredulous that anyone would think he had fallen short after clinching the winning ticket to the White House, the billionaire raised his stubby little fingers in disbelief, and went away sorrowful, for he had great possessions.””


Alas, the hopeful end to that encounter in the gospel of Mark is found in these words by Jesus: “With man it is impossible, but not with God. For all things are possible with God.” I guess, we undervalue the redemptive work of Calvary when we overvalue the unchanging ways of men. Trump may just surprise us, or not. Cheerz.
Posted by michael at 7:33 am